We faced our first big crisis as parents on Saturday. We drove down to San Clemente to my brother Tim's house to help with his campaign. He is running for San Clemente City Council. I volunteered to watch the kids while all the adults walked door to door to hand out fliers. While babysitting, Cash tripped over their rug and went face first into their coffee table. There was blood everywhere and I knew he had cut his lip. I rushed him into the kitchen and I was running cold water over his mouth and hands. Trying to figure out where all of this blood was coming from. He was crying pretty hard at first, but then settled down to just being sad. At first I thought there was blood on the top of his lip that needed to be washed off. Then I realized it was two big cuts on the top of his lip. His bottom teeth had gone through his upper lip on the outside. I couldn't find any cuts on the inside of the lip, so it didn't go all the way through. I called Casey to come home because we had to go to the hospital. I was kind of surprised at how calm I was after that. I grabbed a popsicle out of the freezer to keep him happy and stop the bleeding. Casey finally got there and we drove to the hospital. I was worried about it leaving a scar on his perfect little face, so we chanced the expense of the ER to see a doctor in case he needed stitches. 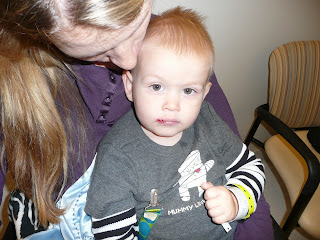 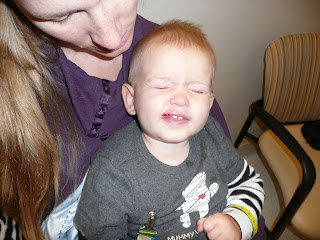 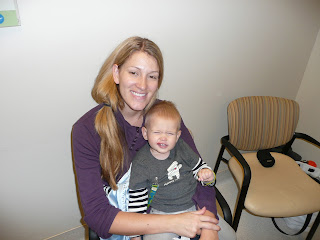 We spent 5 hours in the ER that night. The doctor said the cuts were too wide for super glue and there was risk of the wound opening with how much the mouth moves. He said stitches was the way to go and we had two options. Either hold him down and stitch him while he was awake. Or put him under. I wasn't too thrilled about having him scream and squirm around while the doctor stitched his lip, so we decided to put him under. It was pretty rough getting the IV in and having him hooked up to all of those monitors. We just had to keep him distracted with The Incredibles. Thank goodness for iPhones. 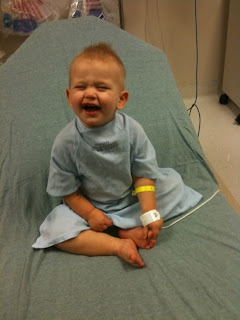 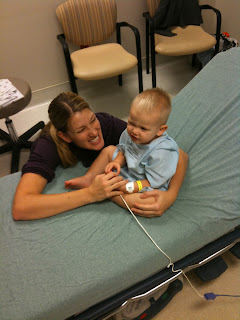 The doctor started stitching him and I couldn't watch. I just held his little hand and focused on his breathing. In and out. Poor little guy. At least he won't remember it. Coming out of the anesthesia was scarier than I thought it would be. I thought he would be pretty funny or loopy. Instead he was screaming and terrified. The doctor said that sometimes they can hallucinate when they are waking up. His eyes couldn't focus and he was shaking and screaming. I just picked him up and sang him all his favorite songs. Eventually he started coming to and recognizing my voice. He was such a little trooper. It was a scary and emotional night, but we got through it together. I'm really sad about him having a scar on his face when he's so young. But accidents happen. We are just glad he's okay. We're okay. We are now officially the parents of a boy. I'm sure that won't be our last crisis. Now we're prepared.
Posted by Lexi Patterson at 9:27 PM

How sad! What a good little boy. I can't believe how calm you were. Welcome to boyhood!