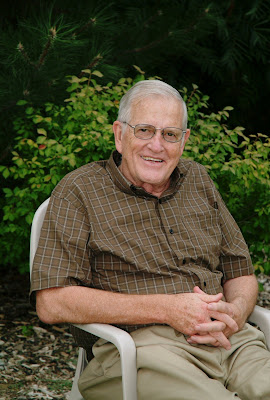 I posted earlier about my Dad being diagnosed with stage 4 Multiple Myeloma (plasma cell cancer). There have been a lot of changes since then so I thought I would update his situation. The doctors were relieved in the beginning that he had this type of cancer because it typically responds well to radiation. The radiation makes it go into remission and MM cancer patients can live years with this disease. We took that as good news. And I was excited that we were talking years instead of days. But as with all types of cancer, you never know what to expect.

My Dad finished radiation treatments a few weeks ago. One of his tumors was almost completely gone, so we knew it was working. When the radiation was over, he was supposed to return to himself (meaning less pain, more energy, more mobility, and more Phil-like), but that was not the case. His body started deteriorating after the radiation treatments. He got a yeast infection on his throat (didn't know that was possible, but Dad's body found a way for it to happen) and couldn't eat for a week. His body has become frail and weak. (The doctor explained to us that his bones were like swiss cheese with holes inside of them because of the MM.) One night he got up in the middle of the night without his walker and fell over which resulted in four broken ribs. Those broken ribs, along with many other pains, make it hard for him to breathe and to walk.

At the beginning of this week, the doctor thought that he had a blood clot in his lungs. And I just found out today that my Dad has pneumonia and is being admitted to the hospital as I write this. This scares me for two reasons in particular. One is that I'm not there and that is killing me. The second reason is that with his weakened condition, he has a small chance of fighting the pneumonia. Especially in a hospital rampant with disease. And he's old. So today I write this post in hopes that whoever reads this will say a small prayer for my Father, Philip Ray Brown. A prayer of hope that he will not be in pain any longer whether that means he is with us longer or he joins my Mom in Heaven.
Thank you. 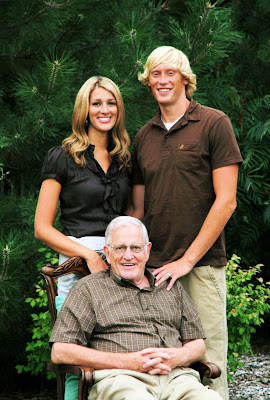 Posted by Lexi Patterson at 2:44 PM

Lexi, I will definitely say a prayer for your dad, for you and for your whole family.

If you need anything, please don't hesitate.

Lexi, Our prayers are with you and your family at this time. Let us know if there is ANYTHING we can do for you!

Lex I will definitely keep your family and dad in my prayers! I am so sorry that all this has to happen to him. I really hope no matter what happens that he feels better soon. You seem like you have a great perspective on the whole situation even though I'm sure it's really hard. I love your dad, he has always been so nice to me.

Oh Lex I started to cry at work! We will for sure keep him in our prayers and will also pray for you and all your family members. My Dad says he is his home teacher, or has been going over to visit, I will make sure my Dad and the ward knows. I love you Lexi!

I'm praying for you and your dad. Love you lexi.

Everything works itself out. There are no accidents in life... just strengthening experiences. You and your family are in my prayers. Love you Lexi!

Lexi, I am so sorry to hear about your dad. we will most definitely keep him in our prayers. i am so sorry for your pain and sadness. I am here if you ever need to talk. Hang in there. much love, melissa

you and your family have such an admirable strength. much love and prayers for uncle phil!

Lex I love and miss you so much. I'll say a prayer for your family and your dad, and I hope he can be relieved from the pain he's experiencing. What a great family, I hope to see you soon.

Your family and dad are in our prayers for sure. I hope things work out for the best...whatever "the best" means. Love you!

I'm praying too. Love you guys.

Your dad is definitely in our prayers all the time. I understand how hard it is to feel helpless when you see them suffering so. You are also in our prayers!

Nikki kind of filled me in about your dad's health on Sunday when I talked to her. I was so sad to hear he's back in the hospital. We will keep him in our prayers. You look beautiful in that picture by the way!

I love you and your family and am definitely thinking of you at this time.

You are the one to admire right now- I can't believe in all this stress you found the time and the heart to generously donate to Ghana. Amazing. Thank you.

This sucks. I'm so sorry that you and your family has to go through this again. It's tragic and doesn't seem fair. I've been thinking of you for awhile. It's so so so sad. We love you and your dad and will be praying for both.

Let me know if there is anything I can do or if you just want someone to talk to.

Lexi,
Thanks for the update on your dad. I have been thinking about him a lot and your whole family. I will keep you and your loved ones in my prayers.
Love yah!