I need to devote an entire post to this heaven sent toy/gym/playstation. My friend Jenn sent Cash a Fisher Price Jumperoo for my baby shower. I broke it out when he was about 4 months old. At first, he didn't really like it. He would just hang there and look at me. Sometimes the music and lights would get his attention and scare him. Then one day he figured out that he could touch the ground and move around. Slowly he figured out the jumping.

Now my friends, the Jumperoo is Cash's best friend. He sits there and jumps and jumps and jumps and smiles and laughs and then jumps some more. It's hilarious to watch. He starts getting into a toy and focusing on it for a while. Then I will come up and start talking to him and he starts smiling, laughing, and jumping all over again. It cracks Casey and I up. He seriously loves this thing so much. 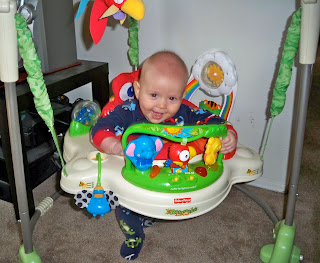 When we were packing up to go to Puerto Rico, I debated bringing the Jumperoo. Looked into shipping it even, but not worth it. After we got here, I realized how much I truly depended on the Jumperoo. It was my trusted babysitter while I cooked and did various things around the house.

So we did something I am not proud of, but we did it nonetheless. We borrowed one. It's a loaner. From Wal-Mart. :) Just don't tell Wal-Mart that. 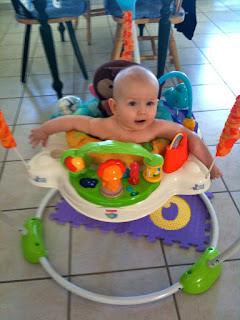 Look how happy he is? Isn't it worth the crime of taking back a used toy in two months? I think so.
Posted by Lexi Patterson at 9:10 AM

I am going to have to look into buying one of these for my next baby-it looks fun! It looks better than the exersaucer thing. Don't take it back just mail it to Nikki! (she needs two!)

i completely understand "borrowing" while in PR. you gotta have some things to help you pass the time. wish i would have "borrowed" some things while we we were there...