Casey had an AVP tourney in San Francisco in September. Cash and I tagged along. We made a road trip out of it and had a fun family vacation. Casey ended up taking 13th and played really well. The backdrop of the tournament was the Bay Bridge. It was incredible. Casey and I had never been to San Francisco before, so we had a blast exploring this historic city. Cash was such a trooper everywhere we went. It was a lot colder than I thought it would be and the only hat I had for Cash was one of his newborn hats that is really tight on him. He looks like he is wearing a super tight sailor beanie the whole trip! He is so adorable. We had a lot of fun hauling him around SF in the bjorn. Casey and I love being his parents. Here are some pics from our trip up north. 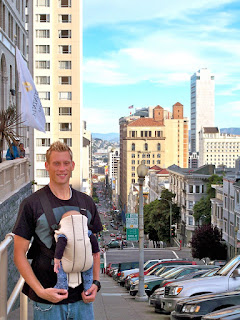 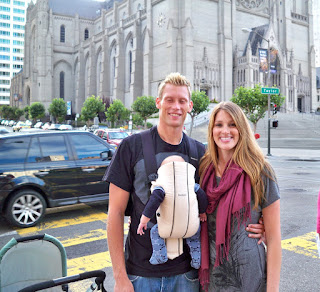 I wanted to explore the city as soon as we got to SF. I convinced Casey that we should start walking around and see as many sites as we could. Our hotel was only a block away from Union Square, so we ventured out. Twenty minutes later we were pushing the stroller straight uphill towards a cathedral on Nobb Hill. It was seriously straight up. I don't know how people live there and climb those hills every day. It is scary enough driving up and down those slopes, but walking them is insane. A little old grandpa beat us while we were trying to get to the top. It was incredible! If I lived there, I would be in amazing shape too. Or at least I would never own a stick shift. The city was beautiful and it made for great exploring. The best part was that Casey had to play the next day and he was so sore from our little exploration up and down all of the hills! 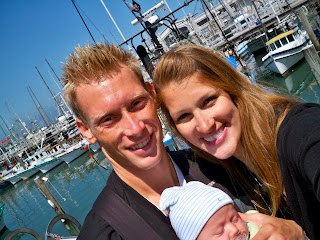 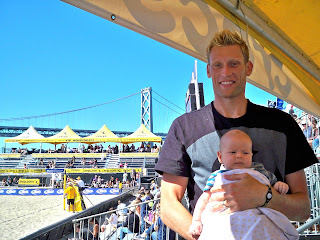 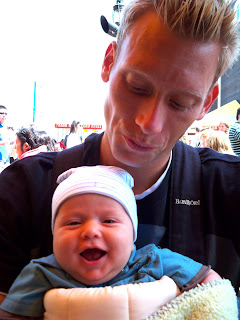 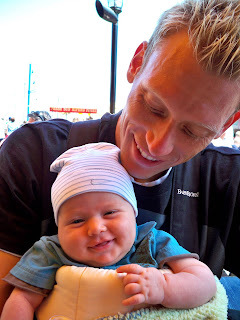 The last day we were there we went to see the Golden Gate Bridge. It was covered in fog the whole time, but it cleared up at the top of the scenic lookout. The problem was that the higher you got, the colder and more windy it was. Made for a better view, but man it was cold and windy. We wrapped up Cash really tight in blankets and then hurried out for a few pictures. It is definitely an incredible sight to see though. Breathtaking. 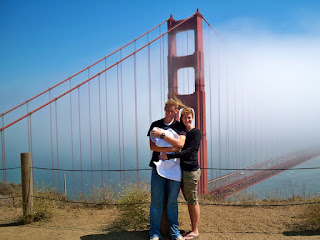 Posted by Lexi Patterson at 1:58 PM

Um hi... I was only 30 minutes away. If only we would have known and I could have seen you! Next time. Next time! Looks like a fun trip. Funny about the old man beating you, too bad you already look smokin hot after having a baby!!

I agree with Linds. You look amazing. I'll need you to teach me some tricks. What a fun trip. Cash is looking chubbs these days!

i love san fran too. such a unique city. anyway looks like you had fun.

Looks like such a fun trip! The hills are out of control over there. I can't believe you walked up and down them -- I think we took the trolley or something. Love the pictures.

Love the pics. Cash looks so freaking cute with his hat and double chins. Your hair is so long and glorious, Lex, you look great. I can't believe how big Cash is, he is growing so fast.

That was great. Fun to see you having a good time. Love the pics