Our second baby boy is finally here. He is a week late, but so worth the wait. Casey and I dropped Cash off on Monday night at my sister Nikki's house for a sleepover. We headed into the Kaiser Permanente Hospital in Irvine at midnight. I was 41 weeks on Tuesday, so that is the soonest that my doctor would let me be induced. Casey was only going to be home for one week, so we needed it to happen right away. I would have preferred going into labor on my own, but I didn't want to take the chance of Casey not being home for the birth. I was in my bed and all hooked up to the pitocin by 1AM. The doctor checked me when I got in and I was dilated to a three. She told me that I could get the epidural at any point. I decided to wait until I was feeling the contractions because I wanted to be able to get up and go to the bathroom and move around if need be. I just remembered feeling so helpless with numb legs and I wasn't in any pain yet. By 3AM I was starting to feel the pain. The contractions were about two minutes apart and lasting for a minute. I was breathing pretty heavy and struggling through the pain a bit. I called the nurse and let her know that I was ready for the epidural. She said that she needed to talk to the doctor first. The doctor came in and checked me again and said I was at a four and a half and I could get the epidural right away. Apparently this memo didn't get to the nurse because she was very reluctant. First she said that I needed to wait until a bag of water was emptied into my IV because I was dehydrated. For 30 minutes I watched that bag of water empty and prayed that it would go faster. By this time my contractions are one minute apart and over a minute long. I am really struggling through them and seriously feeling the pain on pitocin. Then the nurse informs me that my blood work hasn't come back yet and they can't do the epidural until they get it back. Why wasn't all of this done right when I got there and the doctor told me that I could get the epidural anytime I wanted? The nurse turned off the pitocin because I was in so much pain (and she kept mentioning that I was only at a level 4 of pitocin, like I was a big wimp for responding so quickly to a low dose.) So for another 30 minutes I almost blacked out from the pain while we waited for the lab to finish my blood work. Casey was pretty angry at this point and I was just breathing heavily through tears and telling him this was the last baby we would have. I'm so dramatic in the heat of the moment. I just forgot how painful contractions are on pitocin.

At 4AM I finally got my epidural. Casey held me while I grunted through contractions and hoped the needle didn't accidentally paralyze me. Always a nerve wracking process. By 4:30AM I was feeling amazing. Pain free and numb. The doctor came in and broke my water and said that it would probably be a while before the labor because the epidural slows everything down. Around 5:30AM I was feeling a lot of pressure down south. I told the nurse who didn't believe me and said it was probably my catheter. Another nurse had come in to take over her shift and the new nurse checked me out. She instantly said, "Wow, looks like we are going to have a baby. You're dilated to a 10 and ready to go." I was so relieved. They let me labor down for another hour. I brushed out my hair and fixed my smeared mascara from the painful events of earlier that morning and got ready to welcome this baby into the world. At 6:30AM they were finishing setting everything up and the nurse had me do a test push. After one test push she immediately stopped me because she could already see his head. I pushed three more times and he was out. Pushing is the only thing I do well apparently.

As soon as he was out and placed in my arms, I just knew how much this baby was going to mean to me, to Casey, to Cash, and to our family unit. Casey and I were instantly emotional. It almost feels like an out of body experience. Watching the baby come out of you and then hearing him cry and holding him in your arms. It is so miraculous. It was love at first sight. The nurse cleaned him up on my stomach and we immediately had our golden hour. Just me, Casey, and our new little Guy. He was so little and soft all curled up on my chest. Casey and I were just mesmerized by him. Another sweet angel to join our family. What a blessing it is to be able to bring life into the world and be a steward over another child of God. He was just so beautiful. I could imagine him standing up in Heaven with my Mom and Dad while he waited to be sent down to us. They were probably the last angels he saw before he became our little baby. I felt like they were there watching over us. It was such a special moment. 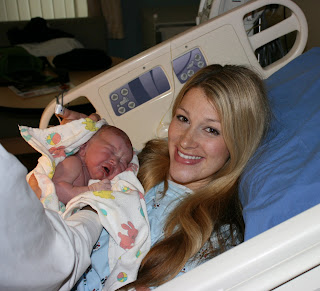 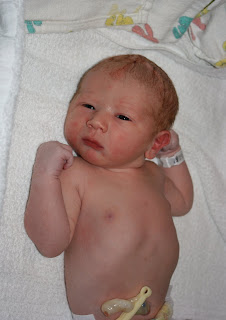 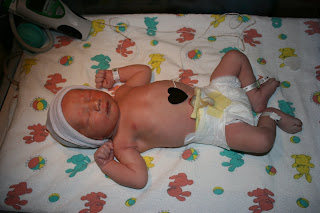 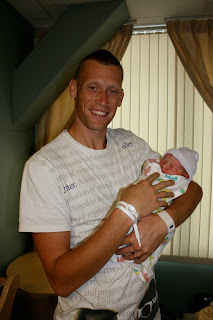 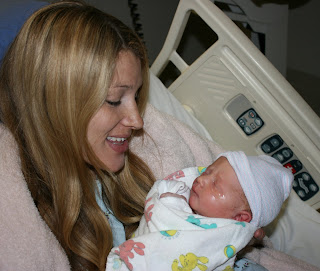 
I was anxious about how Cash was going to react when he first met Guy. He walked into the hospital room and was instantly happy to see Casey and I there. He was in Casey's arms within seconds. Then he wanted to get in the bed with me and drink my juice box. And finally he saw the baby. We let him hold the baby and he was really sweet. He kept saying OOoooh and baby. He even gave Guy a little kiss on the forehead. Then Guy started crying and Cash was really upset. He did not like his baby crying. 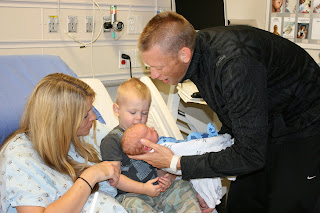 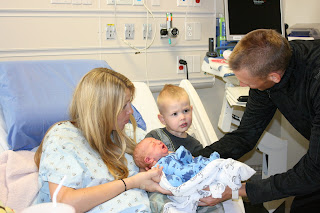 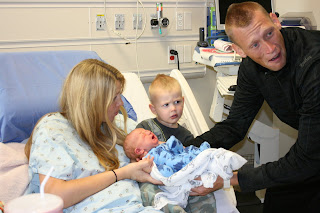 Casey's parents took Cash home with them for four days to give Casey and I some alone time with Guy. That was probably the best gift they could have ever given us. It was so relaxing to just cuddle with Guy and hang out with Casey. It was very peaceful and great bonding for us. Cash came home on Saturday and I was so happy to have him back. As quiet as our home has been, I missed him a lot. At first I was blown away about his size. I couldn't believe he was my baby before Guy came. I changed his diaper and it felt like I was changing a grown man. He seems like such a big kid now. He isn't my baby anymore. It was kind of a hard transition at first. I had to keep reminding myself that he is not even two yet when he acts up. He is pretty soft with Guy. He mostly just ignores him and then every once in a while he pets his head and says baby. He is only jealous when Casey holds Guy because that is his Daddy. But Mommy can be shared.

I love my little Guy so much. I swear I wish I could bottle his scent and keep it forever. He's just so yummy. I forgot how wonderful it feels to have a newborn sleep on your chest. Just a little nugget. I'm smitten with him. I love my boys and the daily joy they bring me.

I'm so excited for you! Little Guy - he looks like his big bro. Congrats!