We flew to Dallas, Texas to stay with my best friend, Kimmy, and her family. Her husband, Trent, works for a volleyball club out there named Tejas, and the club flew us out there to have Casey and his partner, Kevin Wong, coach their beach camp. Free trip to Texas? What?! Yes, please! Kim has a little boy named Aiden who is 2 years old and she is pregnant with baby number two (a baby girl due in July!). The club put us up in a hotel room the first three nights while Casey coached. Kimmy, Aiden, Cash, and I hung out and played all day while the men brought home the money. It was so so so much fun. I miss living by Kim. And it was fun to see Cash play with Aiden, or rather watch Aiden beat the crap out of Cash. Ha ha. Boys will be boys. 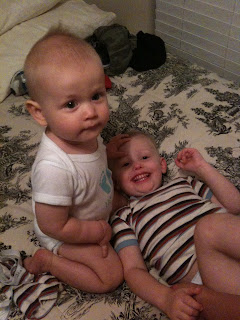 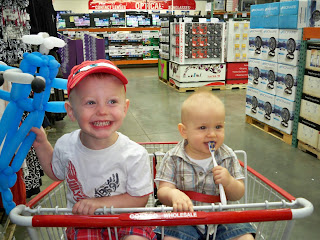 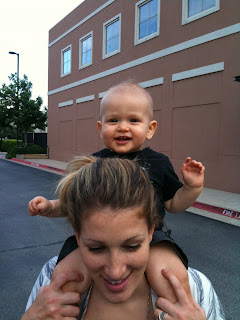 The weekend we were there was Mother's Day. Casey and Trent surprised us with two appointments to get massages. Uhmazing. The only catch was that we needed to find our own babysitter cause they still had to work. Nice one boys. It was still a very nice surprise. This was my first official Mother's Day and it went wonderfully. That night we went out to dinner to, where else, barbeque!!! And I must say that it was delish. It was a place called Babe's. Then we followed it up with some Blue Bell ice cream. It's so cheesy, but everything was bigger and better in Texas. I could live off of barbeque and blue bell ice cream for the rest of my life. Casey, Kevin, and Trent also played in a volleyball tournament and won! Casey wore the medal around his neck for the rest of the trip. 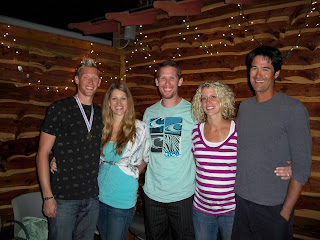 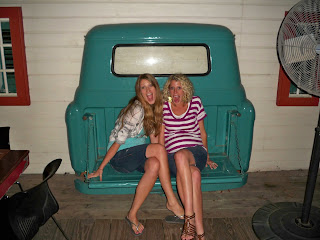 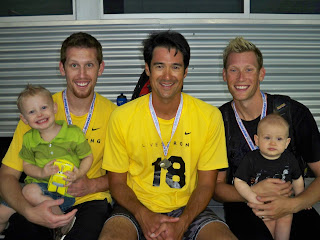 After the coaching was over, we piled in Kim's mini van and road tripped 3 hours to Austin, TX. My brother Johnny lives there with his wife and three kiddos. His wife, Johanna gave birth to their third baby, Kingston, the week before and I was so excited to meet him. Also, I was stoked to see Austin because I've been hearing so many great things and had never been. The plan was simple. Eat bbq, play games with the fam, eat Blue Bell, and see Austin. We accomplished that and more. We stayed up playing Risk and Ticket to Ride every night until 3AM at the Brown house. That made our days start later that we wanted, but it was worth the memories. We ate at Salt Lick, which was my favorite bbq of the whole trip. The sauce was a little mustardy and smokey and barbequey. I could drink it. I did drink. Don't tell. 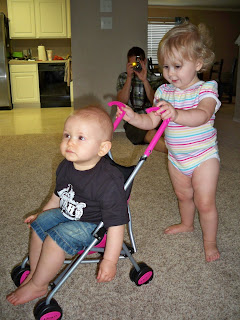 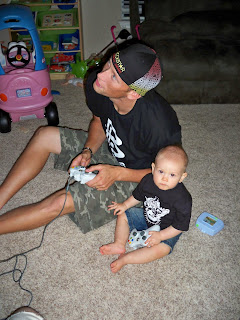 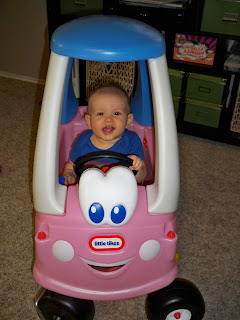 Johnny also took us to this burger place that I can't recall the name of, but man was it good. Fresh burgers, fresh fries, and shakes made with Blue Bell ice cream. Are you kidding me? How do people stay skinny in Texas? I am pretty sure I packed on at least 10-15 lbs while visiting. Johnny took us on a tour of downtown Austin. I really enjoyed the artsy feel of the town and the architecture of the buildings. I could totally see myself living there. We hung out at the Whole Foods headquarters in downtown Austin which is mind boggling. It was the size of a Costco with a park on the top floor. It was fun to see what John has been raving about for years. Austin rocks. 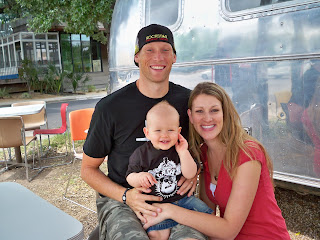 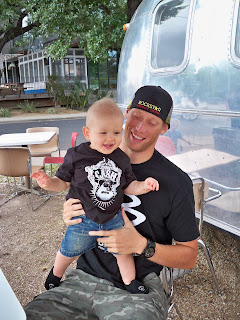 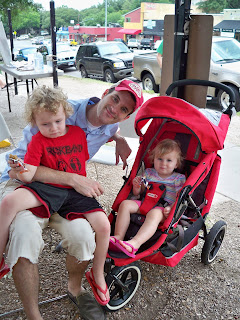 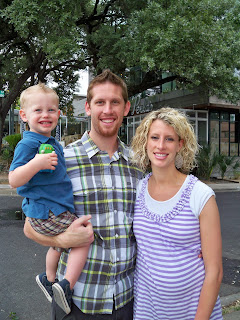 We headed out on the road to drive back to Kim's house in Dallas. Our flight back to CA left early that evening, and we still had to drive 3 hours and pack up our remaining luggage. We were about half way there when Kim noticed the car was overheating and getting worse. It had been overheating the day before that, but had gone back down so we weren't worried. We pulled over and got some advice from a local radiator guy. He said the radiator was cracked and it was about to blow. We could either risk doing more damage to the car and drive the rest of the way. Or we could get it replaced there, but it would take two hours. We still had another hour and a half to drive. Basically we weren't going to make our flight if we got it fixed. I wanted to push through and make the flight, but didn't want to risk more damage to their car. In the end, we decided to change our flight to the next cheapest flight which was a week from then.

Casey talked me into it. I wasn't really too amped on the idea at first. We had already been there a week. I didn't want to be the guests that overstayed their welcome. Also, I was leaving for Utah on the Wednesday after we got home to go spend time with my Dad. I was stressed out about getting home that late, doing laundry, packing, and leaving all over again. I finally got over it, because there wasn't much else I could do at that point. Casey promised he would work private lessons with Trent that week to make up the cost of changing the flight. So there we were stuck in the middle of Texas with two kids. We walked across the street to this Mexican diner and made that our little home for about 2.5 hours. We ate food, laughed, talked, played games, and ended up make the best of the situation. Finally we were back on the road. 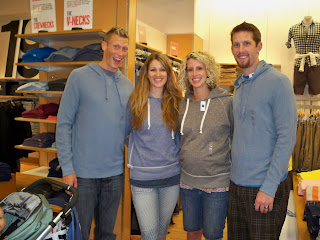 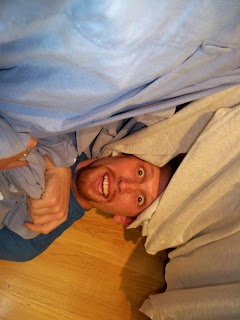 Trent trying to hide under the clothes to pretend he wasn't with us. 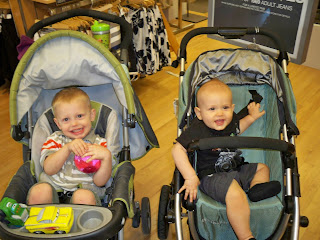 Aiden and Cash being good sports at the mall 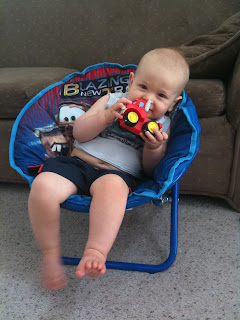 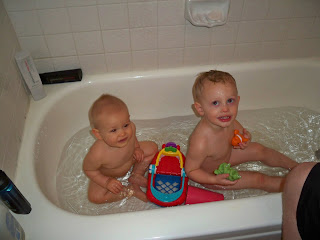 The next week as guests at Kim and Trent's, was better than I could have imagined. They thoughtfully gave up their bedroom for us to stay in. I begged them not to, but they insisted. Aiden slept better in his own crib than a pack n play and there was a queen bed in his room. We planned out meals for the week, switching on and off days with me cooking and Kim cooking. We exchanged babysitting for date nights. Of course late night games, movies, walks, and swimming outings were involved. It ended up being such a fun week. Kim and I even got our butts in gear to go to the gym twice! Aiden and Casey gained an arms distance away fondness for each other. And I renewed my love for my best friend Kimmy. Casey was right. We had a lot of fun and I'm so glad we stayed. Hopefully we'll live near the Sorenson's and the John Brown's some day. I'd even move to Texas for them.
Posted by Lexi Patterson at 1:45 PM

Ahh Lexx!!! You would move to Texas?? I think you should. I am so impressed with all your blogging. How long did this take you? I LOVED our rendezvous and I'm so glad you chose to stay with us a week longer. I also renewed my love for you and the week couldn't have been better. I want Salt Lick BBQ right now, and Mighty Fine burgers. So good. The point is, I love you guys, loved our trip and I'm so glad you came.